In 1994, when she was 4-1/2 months pregnant, Alexandra Allred made the U.S. Women's Bobsled team and was named "Athlete of the Year" by the US Olympic Committee.

Alexandra Allred made the U.S. Women's Bobsled team in 1994. It was the first recognized team by the United States Olympic Committee but it would be a long haul before women would be allowed to participate in the Olympics. In 1994, Allred was named "Athlete of the Year" by the United States Olympic Committee, was profiled in Sports Illustrated and in the newspaper of more than a dozen foreign languages. Allred was also four and a half months pregnant at the time.

Shape, Fit, Fitness for Her, Sports Illustrated for Her, Muscle & Fitness, Ms. Fitness and multiple parenting magazines all carried the story, interviewing Allred on varying topics of morning sickness and childcare to sprint training and plyometrics. While training, Allred was clocked at running 21 MPH and squatting 350 pounds.

For more information about just how she made women's sports history and became the first ever U.S. Champion, check out the books, Entering the Mother Zone or Atta Girl! A Celebration of Women in Sports (winner of the Amelia Bloom Award, Wish Publishing).

At the same time, Allred was earning a reputation as the "read-back reporter" in the sports world. She scooped ABC Wide World of Sports and ESPN when she interviewed Bill Willis, football legend and notoriously shy of the press. Over the years, she has interviewed hundreds of professional, national and Olympic athletes from all sport disciplines. (On a side note: Her reputation was such that when Wendy's founder, Dave Thomas, died, the Wendy's headquarters asked that Allred write his biography for an in-house publication).

In 2001-2002, Allred played women's professional football for the Austin Rage. Under assignment from Sports Illustrated, Allred was to try-out for and make the team before being given the green light to write the story.

She joined the non-profit www.pregnancy.org as the Fitness Expert, answering questions from around the world and penned the children's health series with the education publishing house Perfection Learning.

In 2005, Allred was asked by Volvo Magazine to be the first North American journalist/adventure writer to test-drive the Gravity Car. With only two prototypes in existence, "it was one of the best rides of my life! But there was a lot of pressure not to crash!"
(Volvo magazine, issue 2, 2005, page 38: Volvo Car UK, 7 St. Martin's Place, London WC2N 4HA UK)

During that time, Allred had her own sports column, continued with her martial arts and taught kickboxing. Even when she became editor of the Mansfield NOW magazine (a community magazine outside Dallas, Texas), she continued to pick up freelance assignments that were sports and/or adventure related. She completed her first marathon in 2005 and began adventure racing with friends in 2009. She earned her 4th degree Black Belt with the Southwest Karate Association from the American Karate Academy under 7th degree Black Belt Jim Choate. Allred began her martial arts career with the renowned Jhoon Rhee, "Father of Modern Tae Kwon Do," and training partner to Bruce Lee. She received an honorary award from Master Ernie Reyes of Los Angeles, Californian and trained with TaeBo creator Billy Blanks.

In 2011, Allred earned her Citizen's Fire Academy certification and continues to train for her next marathon with friends and dogs. She currently teaches Pilates, kickboxing, self-defense and walking with a community college and continues to regular kickboxing classes. www.alexandrapoweallred.com 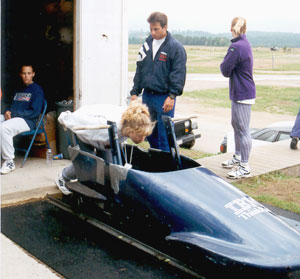